Skip to primary content
Skip to secondary content
Exit Row Band, a world famous professional private event cover band, will be performing a special Kentucky Derby Day concert at Parx Racetrack on Saturday May 4th, from 1pm-5pm.  Doors open to the public at 10am, but come early as people often line up at 6am.
There will be free family fun in the picnic grove along with BBQ and food trucks.   Patrons can bring their own food and beverages (no alcohol and some restrictions apply), blankets, chairs and tents to enjoy the live racing and world famous Exit Row Band.
Parx Racing is located at 3001 Street Road, Bensalem, PA 19020
Top-rated Exit Row Band’s professionals have done over 1,000 events across the world since 2005. They’ve provided opening entertainment before acts ranging from Peter Gabriel to Sarah McLachlan to George Thorogood,   were featured shows at New Jersey’s biggest events from The QuickChek Festival of Ballooning to Shad Fest to Yelp’s biggest Event of the Year.  They’ve performed for crowds in the tens of thousands,  shows can be seen on local cable stations, have entertained the most exclusive clubs, played the coolest venues including NYC, Jones Beach, and several weeks each year in The Hamptons.  Their travel team tours several months a year, having been on stages in 14 countries and 17 states.
To be kept informed of public events near you, “like” their Facebook page at:
http://Facebook.com/ExitRowBand
For more information on the band:
http://ExitRowBand.com
http://Twitter.com/ExitRowBand
http://Instagram.com/ExitRowBand 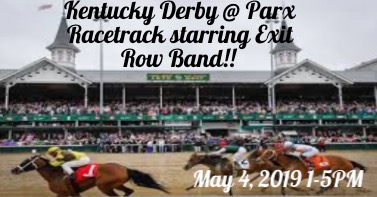 Thank you Annie for putting on a wonderful event last Friday, and thank you Clinton for being the awesome crowd you always are! It was a beautiful night at a picturesque setting on the river next to the waterfall. There were people lining both sides of the river, the bridge, and both sides of the street. As always, super people in Clinton, and we appreciate everyone who told us how much they enjoyed the show! A special Thank You to special guest Tony, who helped make the night really special. We hope to see all of you at one of our next public shows! And, if you can make it to Arizona, Exit Row Band and Holly Marie will be playing in November with 3-time Grammy winner Sarah McLachlan for a great cause. 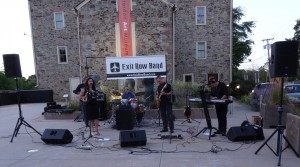 We received an email today one from of our fans. They mentioned after listening to live music on the NJ scene for the last 15 years, Exit Row Band is the best classic rock band they’ve heard so far. Thank you!

We love getting fan email 🙂 Running the premiere classic rock band in New Jersey is not easy! Its hours and hours of work each week – and we do it all for the love of music.

Thank you everyone! We’re going to work even harder this year, as our private event schedule is getting fuller and fuller. But no worries – we promise to play several classic rock shows for the public this year!